The Bali Starling (Jalak Bali) is uniquely endemic on the island of Bali and found nowhere else in Indonesia. When Erwin Stresemann discovered this bird in 1912 and named it Leucopsar rothschildi, wildlife collectors fell in love with the bird.

The clear, white feathers and striking dark blue marking around its eyes, and the friendly, trusting nature of the Bali Starling became some of the reasons they were exported massively, leading the species towards the brink of extinction. 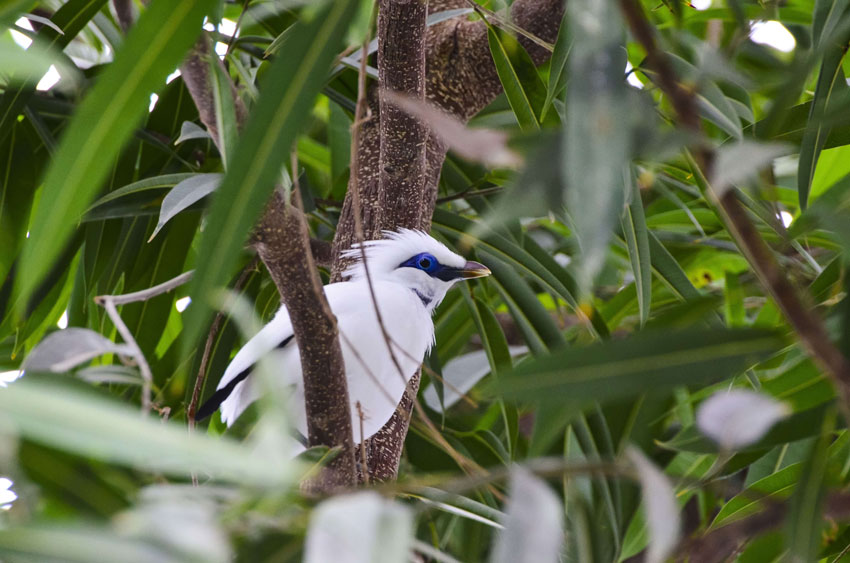 The story of the Bali Starling is a struggle story of conservation and hope for the species’ survival.

Bali Starling (Jalak Bali); When lack of knowledge means death to the birds

During the late 1960s to 1970s, there was a boom in the demand for exotic birds as caged pets. As a result, poachers hunted down the Bali Starling to be exported to the US and Europe.

The climate of these regions is strikingly different from that of Bali and coupled with the lack of knowledge to treat the birds with proper care, many of these birds passed away. Very few of them had managed to breed, so during this time, Bali lost hundreds of its precious wildlife in vain.

The poaching never stopped. The market for exotic caged birds was still a driving force behind the hunting and improper breeding in captivity. Through the 1970s, the wild population of Bali Starlings never exceeded 200 birds on the island. Loss of habitat was another factor of the falling numbers.

By this time, the Indonesian law explicitly stated that the bird is a protected species, and later in 1988, it was classified as “Threatened” by the IUCN Red List.

But their numbers continued to drop.

There was new hope in 1990 when a small number of captive-bred Bali Starlings got released into the wild to speed up the process of repopulation. In 1991, Bali officially recognized the species like the island mascot, and this marked the beginning of serious efforts to conserve the near-extinct bird.

In the early 2000s, Nusa Penida – a small island to the southeast of Bali – and the West Bali National Park became the centers for breeding and releasing Bali Starlings. Although these areas are much more secluded, the breeding program was still no easy task.

At one point the total population of the Bali Starling was lower than 50 birds in the wild, despite previous successful breeding programs. This news was alarming to all conservation institutes as they tried to figure out the reason behind the huge loss.

Cases of theft from conservation institutes, diseases, and the still high demand for the bird as pets threatened their status. If no Bali Starling is left in the wild, but some still remain in captivity, the IUCN Red List will have to raise the status of the bird to code E.W. meaning “extinct in the wild”.

With the advent of new GPS tracking technologies and the government’s involvement by enforcing laws and funding educational programs, the loss rate of Bali Starlings has dwindled to nearly zero.

After two decades of struggling and learning from mistakes in conservation, Bali Starlings now only die of old age, and nothing else. The protection of these birds became one of the top priorities of both conservation institutes and the government.

Where we are today

Jumping forward to 2017, Bali Safari Park officially launched the Bali Starling Aviary. It’s one of the few remaining havens for these precious birds. Apart from Bali Starlings, the Aviary is also home to other endangered endemic birds like the Asian Glossy Starling, Oriental Magpie Robin, Green Pigeon, and Zebra Dove.

Of course, visitors of Bali Safari Park and guests of Mara River Safari Lodge are free to come by to learn more about these incredible birds and their stories.

In 2018, there were still less than 100 Bali Starlings left in the wild. But in August 2019, Bali Safari Park released 40 more birds into the wild in the hopes that the population growth continues steadily.

Bali Safari Park will continue to expand its resources and energy on the starlings’ breeding program, study them and release them into the wild, to ensure that we no longer see a near-extinction event in the future due to human activities.