When you think of a Sun Bear, what is the first thought that comes to mind? Picture a small bear, with a black shiny coat and a patch of sun on its chest.

Yes, the Sun Bear gets its name from the golden patch of fur in the shape of a crescent on its chest!

Here are some more interesting tidbits and facts about the Sun Bear. They are the smallest bear species in the family. An adult Sun Bear will grow to only half the size of the average American black bear.

Arboreal is a term to describe an animal that spends most of its time living in the trees – which the Sun Bear actually does! Their claws have a distinct hook shape that lets them hang on to tree branches and scale vertically with ease.

Laos as their home

Being a rare bear, it is currently suspected that Laos is the last place where they congregate in the wild. This is because of the rugged terrain, lack of human development and intervention and also the abundance of forested terrain where the bears can freely roam.

They have short and dense black fur that has a low surface tension, making it excellent for repelling rain, mud and other external particles efficiently.

They are equipped with long narrow tongues. This lets them extract honey and dine on insects from deep within the crevices of trees. 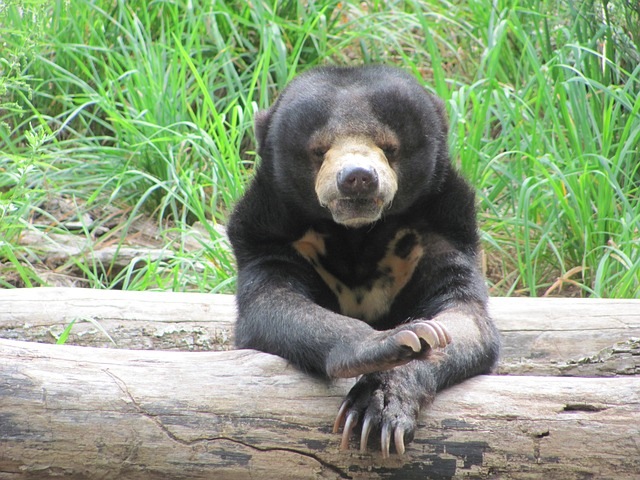 Their name “Sun Bear” is derived from the crescent-shaped pattern that can be seen around their upper torso and neck area. This golden pattern appears like the rising or setting sun depending on the angle you look at it.

The Sun Bear is known by various nicknames such as Honey Bear; due to their fondness for honey, Dog Bear; because of its small size and shiny black fur coat and, most commonly, the Malay Bear in Southeastern Asia, due to how often it’s spotted in that geographical region.

What do you think of the Sun Bear? Have you seen one in person before?

To learn even more about other bear species, read our article here.

Join our Safari Journey in Bali Safari Park to visit them in person! Our talented and knowledgeable Park Rangers will tell you everything you need to know about this animal, along with other animals in the Park.