The Cockatoo is an especially sentimental bird to many Indonesians. For those who grew up and spent their childhood here, they’ll most likely be familiar with the “kakatua” song that was taught in elementary schools.

The song is also often used in households as a lullaby for toddlers and babies, and for many it is also one of the first songs that the parents taught them as a child.

Cockatoos are receptive to sound

This most likely stems from the fact that the cockatoo is a highly intelligent bird. They are highly responsive to sounds and are capable of mimicking melodies and human speech. It has even been observed that they sometimes synchronize their body movements to their surrounding sound.

With that in mind, it is fascinating how the melodic nature of this bird has become integrated with traditional Indonesian culture.

There are numerous different species of cockatoos depending on where they are located. But the most iconic is the sulphur-crested cockatoo or cacatua galleria. They are distinguishable by their bright yellow crest on their head. 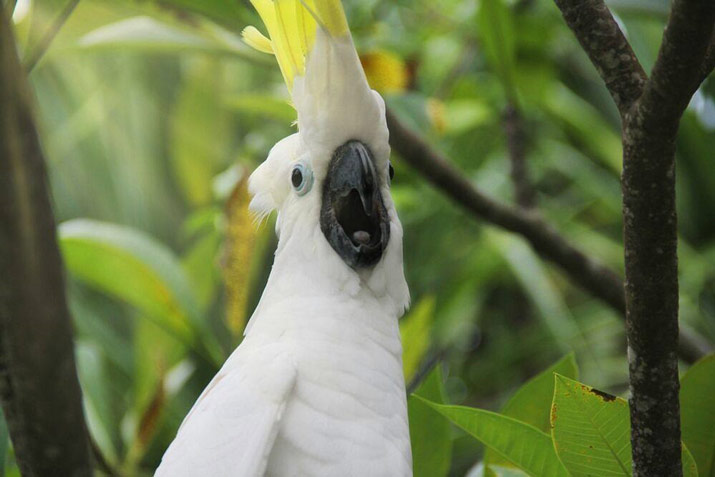 Cockatoos’ Crests are decorative, yet functional

Aside being a decorative headpiece, their bright crests serve other purposes too. The cockatoo can raise and lower their crests as a way to communicate. For example, when their crest is lowered it means that they are feeling calm and content with their current state and surroundings.

This indicates that the bird is relaxed and familiar with the things going on around them. It is generally the state that they are most approachable.

However, when they raise their crests it is a sign that they are showcasing their physical prowess. This can mean that it’s defending its territory, their flock and are also used when in search for a mate.

The raised crest can also be a way for the bird to express its internal instincts, such as when its feeling excitement, surprise, fear or just pure curiosity.

Each one is indistinguishable, therefore you should take precaution when approaching a cockatoo with its crest raised as it could mean that it is afraid and does not want to be disturbed, or it could also mean that it’s curious and is quietly observing.

In terms of diet, the cockatoo normally eats a mix of berries, seeds, nuts and roots. As this bird is often seen around suburban areas, they are also used to feeding from what humans have given to them over the years.

When they are not eating, they like to bite the leaves and small barks from trees so they can sharpen and trim their bills from getting too large.

The kakatua is one of the many unique birds of Indonesia. Their integration to the local culture is prevalent and extends to many generations.

If you want to learn more, and perhaps interact with these intelligent birds come visit them at Bali Safari Park.