Piranha in a movie is often depicted as a ferocious and aggressive predator that lives in the Amazon River.

But are they really like what is depicted in the movie? Let’s take a look at this fish, the ferocious predator. 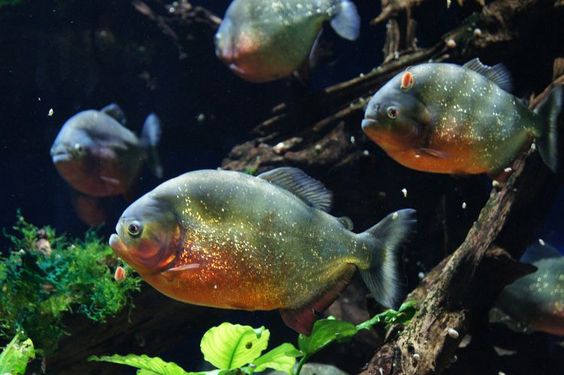 Piranha Fish (Pygocentrus nattereri) is part of the Serrasalminae subfamily which belongs to the Characidae family. Having a native habitat in rivers of South America, this fish can also live in swamps, lakes and reservoirs.

This aquatic animal is often describe as a ferocious carnivorous predator that always preys on other fish. However, they are actually omnivores or fish that eat everything, including aquatic plants. Piranha will behave like a cannibal when he is very hungry and the food source is reduce.

Piranhas are easily recognize by their large, blunt, flat heads. Its body is oval in shape with fins that are not too wide. In their natural habitat, they can live up to 10-25 years.

Uniquely, they have a row of sharp teeth in both jaws. The teeth grow close together and interlock.

Usually their teeth are triangular in shape and sharp like knife blades. Strong jaws and sharp teeth make this fish very strong in tearing flesh.

Do animal friends know, piranhas are also know to make sounds, you know! They have three distinctive sounds to warn their opponents.

If they feel threatened by another animal, they will make a sound similar to a dog barking. When fighting with other fish, they make a grunting or thud sound produced by the swim bladder’s organs. He will also grind his teeth when the opponent does not back down.

At Bali Safari Park , there is a new activity that we can do, namely Piranha Feeding. By topping up IDR 50,000, friends can feed the piranhas directly. Feeding is carried out in the Fresh Water Aquarium area at 10.00–12.00 and 13.00–15.00. Come on, have an exciting adventure at Bali Safari Park, get tickets here!