The Ostrich is an iconic flightless bird native to the African savanna and desert. They are easily distinguishable by their appearance, having long necks and legs.

Having existed for at least 120 million years, they are one of the oldest bird species on our planet and also one of the largest.

Here are some more interesting facts about the Ostrich.

They have functional wings

Despite not being able to fly, the Ostrich has wings that span about 2 meters.

In fact, their wings serve multiple purposes that include shading their chicks from the heat and using them during mating rituals where the male beats his wings to attract mates.

Their wings also function as “flaps” that are extended when they need to make turns at high speed, much like an airplane.

Eyes bigger than their brains

The Ostrich has substantial eyes that measure, on average, about 5cm across. This lets the bird spot predators from long distances and sprint away using their powerful legs before they come close.

They take turns incubating the egg

The female Ostrich incubates the egg during the day time and takes turns with the male during night time.

This is because the females have feathers that blend in with the sand during the day, whereas the male Ostrich has a black drape that is nearly undetectable during the night, providing maximum safety for the egg.

The Ostrich can reach land speeds of up to 70km per hour, allowing them to outrun many of its predators. In addition, their long legs can also be used as weapons to perform a forward kick to potentially knock out or kill their predators. 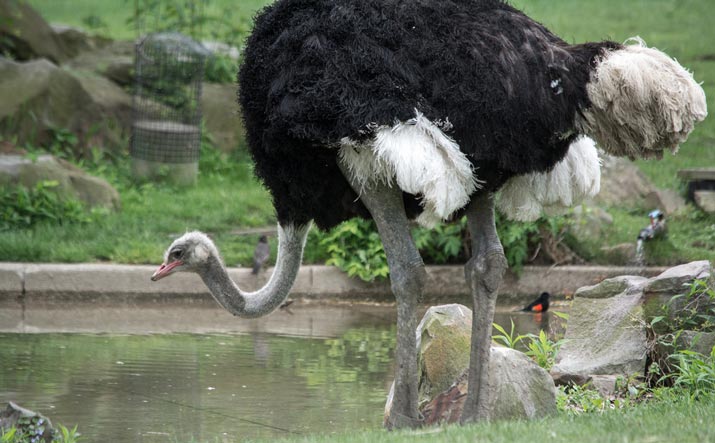 They don’t bury their heads

Contrary to popular belief, Ostriches don’t actually bury their heads in the sand or under ground. One of their defensive behaviors is to lie low to the ground to avoid being seen by predators.

They do this by lowering their tall necks to the ground. Combined with the color of their plumage this behavior serves as a perfect camouflage to stay hidden.

You can pay the Ostrich a visit in Bali Safari Park. Make sure to ride the Safari Journey where we take you on a tour of the animal residents through their natural habitats, including the Ostrich!