How Do Orangutans Communicate?

Orangutans share a special bond with human beings because we share many similarities with them. They are covered in hair, not fur. They are apes, like us. They have opposable thumbs and have the capacity to learn languages and communicate. So how do orangutans communicate? Read on to find out more.

The social life of an orangutan 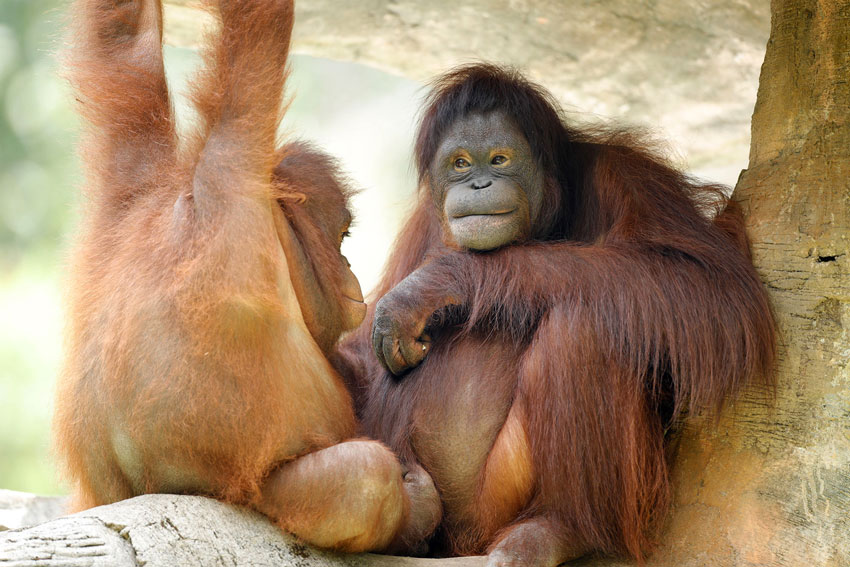 Orangutans exhibit both social and solitary behaviors. Mother orangutans spend a lot of time with their babies and infants. Young adult orangutans frequently socialize with other orangutans of the same age, but occasionally ‘visit’ their mothers until around 15 to 18 years old. Afterward, it is a solitary life for adult orangutans, paying each other a visit only during the mating season.

Most social animals develop a system of communication or signaling, and this communication and social behavior typically stays with them throughout their lives. In the unique case of orangutans, communicative behaviors are still retained even when they exhibit some solitary behaviors at an older age. 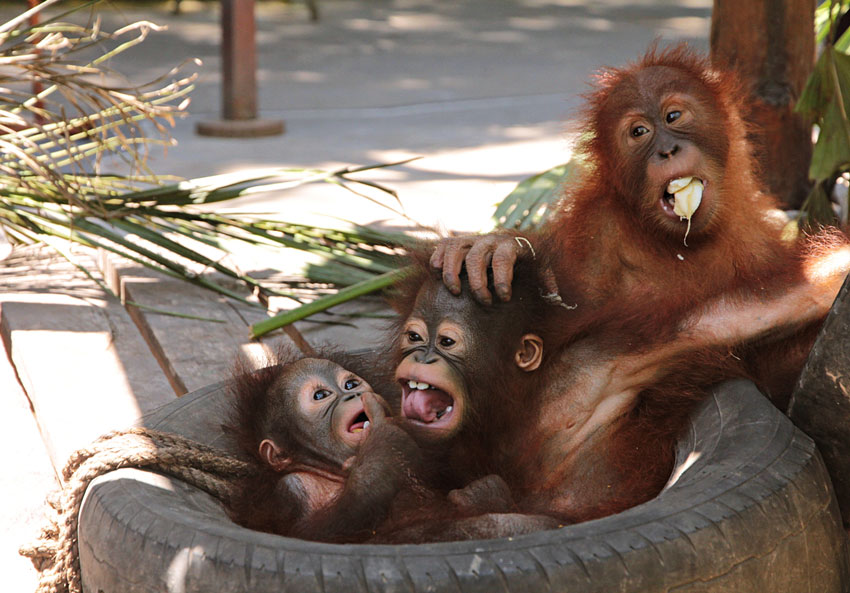 Compared to other apes, orangutans don’t make much sound. Given the semi-solitary nature of the orangutans, verbal communication serves better for long-distance signaling with the surrounding apes in the area.

Loud long calls that last up to a minute are commonly heard in the canopy. These could possibly mean several things: to let other orangutans know that they are in the location and to give a stressor signal of an impending storm – in order to help them and other orangutans make preparations to protect their young from torrential rainfall.

Bellow is a distinct type of long call that adult males produce using their throat sack, which they develop at adulthood. Since not all males develop the throat sack at the same rate, the sound is associated with asserting dominance and female attraction.

Orangutans are known to laugh like human beings. This can be heard when they are tackling one another. The mothers create short gentle sounds to encourage their babies, or when they are playing with them.

For example, they use visual signs like pointing, waving, banging rocks and twigs and moving their limbs a certain way. These gestures are rich in meaning – from requesting or sharing objects, to initiate interactions and to warn other individuals to stop harmful behaviors.

Researchers found that when orangutans feel their message is not fully understood, they try to communicate it again in a different way or to repeat their gestures to make the message clearer. It is as if the orangutans communicate similarly to a game of charades.

Scientists found out by pretending not to understand the orangutans when they request their favorite foods, and intentionally giving the wrong type of food.

Have you seen the orangutans at our educational shows? Bali Safari Park offers a number of ways you can meet these lovely intelligent apes. Spend some time with them, and maybe you can learn how to talk to orangutans the way our Safari Rangers do.