After the birth of Corona the baby giraffe, wonderful news continues to sweep through Bali Safari Park with the hatching of 22 false gharials. False gharial or Tomistoma schlegelii is a species of the freshwater crocodilian family found throughout Indonesia, Brunei, and Malaysia. The false gharial is classed as vulnerable in the IUCN Red List because their population is less than 2500, and the numbers continue to fall globally.

The decrease in population is caused by the disappearance of their natural habitat due to the continual fragmentation of the swampy rainforests. Therefore, conservation efforts such as the preservation of habitat and the protection of the species are crucial to diminish the threat of the extinction of false gharials. 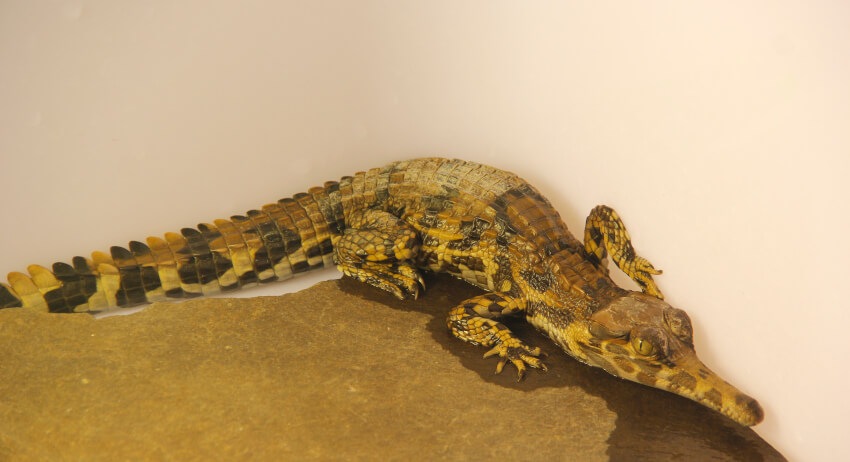 The false gharials in our care have laid 24 eggs, and the best treatment has been given to the eggs to maximize their chance of hatching. After around 90 to 110 days, we witnessed the birth of 22 beautiful hatchlings in January this year.

“We now have a new task, which is to care for the youngest members of Bali Safari Park – these baby False gharials,” said dr. Kadek, an Assistant Curator at our park.

The post-hatching treatment of the reptilian hatchlings was accomplished by placing each individual hatchling into a large box that has been fitted with heat lamps and UV-B lights. The temperature of the box was regulated to range between 28 to 33 degrees Celsius.

Caretakers of these young false gharials record the temperature as many as four times a day. The false gharials are fed daily with cuts of high protein Nile tilapia, catfish, and crickets. The overall health of the hatchlings are monitored closely by Bali Safari Park’s medical team, because the young reptiles are vulnerable to diseases.

With the birth of the vulnerable false gharials, Bali Safari Park, as the biggest conservation institute in Bali, has yet again achieved one of its wildlife conservation goals. Our team of veterinarians, keepers, and caretakers are proud to be part of this historic moment in Bali Safari Park. Their work contributed to the much larger natural world, and to the continuation of the endangered species.

We hope that such a success can be repeated in the future, for the conservation of other species that are in dire need of protection.

Your visit to Bali Safari Park funds our conservation programs. When you see your favorite animals in our park, remember that their birth was made possible because of visitors such as yourself. Book a visit and enjoy a 30% discount for bookings between 1 August 2020 and 31 March 2021.